The Dean of TV Critics

I suppose in order to be the "Dean of TV Critics" you need to watch a lot of TV. After looking at Tom Shales, I'm beginning to think it's a dubious honor at best.
Posted by metrichead at 03:08 No comments:
Email ThisBlogThis!Share to TwitterShare to FacebookShare to Pinterest
Labels: I Don't Watch Much TV Anymore

Sidenote: I saw this on Jack Lessenberry's blog. If the GOP wants to stay a permanent minority, this should help.
Posted by metrichead at 13:50 No comments:
Email ThisBlogThis!Share to TwitterShare to FacebookShare to Pinterest

"The climate for an independent is about as good as it's ever going to be," Schwarz told Skubick. But money is going to be the key for any successful independent run.

He's got my vote already.
Posted by metrichead at 13:39 No comments:
Email ThisBlogThis!Share to TwitterShare to FacebookShare to Pinterest
Labels: Joe Schwarz, Michigan politics

The most troubling part about being at the Auto Show is whenever you want to take a nice picture of something, some idiot always has to walk in the picture or hop in the car.

BMW, for example, is my favorite brand of automobile. Considering I live in Michigan, that's taking a small risk. This is the state that's home to the Big Three. The loyalties toward "American made" (if that means anything anymore), is so intense, my sister was compelled to get a Ford Escape after driving Hondas for years, simply because she didn't want people eyeballing her Passport.

But because morons kept getting in the shots of all my pictures, my BMW photos turned out quite disappointing. Except for this motorcycle. It's a sleek-looking bike, that's for sure. But if you ask me, it looks like BMW just stole the bat-cycle as the Caped Crusader was investigating a mystery in Gotham and all they did was slap on white fairings and a BMW logo. 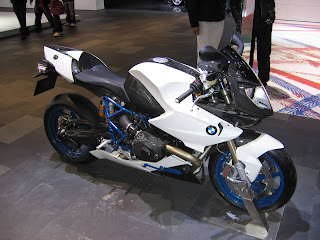 Of course, what is going to the BMW display without at least hopping in a convertible? 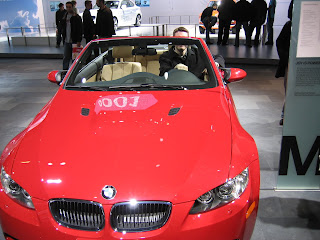 Yes, that's me. And no, I'm not adjusting myself. That's what I'd look like sitting upright and proper were I actually to drive that vehicle. There was no point in Sean sitting in the seat since he's two inches taller. Apparently, the Beamer-people have it in for us taller folk.

I admit, I'm not much of a car enthusiast. I do prefer trucks. But what kind of truck-owner would I be if I didn't at least check out the latest model of GMC's Sierra? This truck here is the hybrid version. I drive a black Sierra with an extended cab, and style-side box. It's seen better days. So has GM. If my truck were brand new, this is apparently what it would look like. 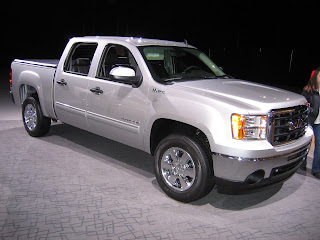 And these are just shots of the interior. 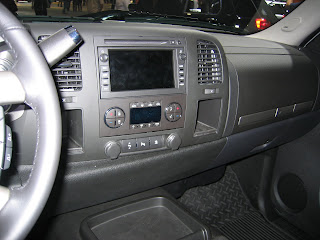 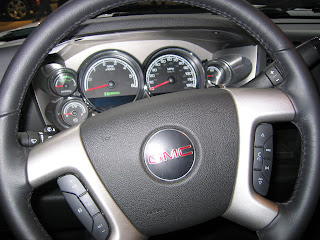 We noticed the interior was a bit dusty. We expected the panels to be covered in fingerprints with all the attendees getting in and out of it, but couldn't they at least run a rag through it once a week or so?

Sean and I also happened to notice there was a wide empty space behind us. We could tell the fact that Lamborghini and a few others that didn't make the show would have obviously made for additional space. It would've been quite apropos to place some sort of banner acknowledging the contribution of former Detroit city leaders. "This empty lot is brought to you by Monica Conyers."

Lucky for Detroit, the Auto Show will remain there, as well as in Michigan. Detroit was given an easy out when they were offered the chance to acquiese Cobo Hall over to a regional authority of Wayne, Oakland, and Macomb Counties. Some, namely Mrs. Conyers, and a couple of others, wouldn't have it that way. Their feet dragging may have ended up in Michigan losing the auto show altogether and pitting the city against Oakland County when Brooks Patterson began wooing the directors to bring the show to Rock Financial Showplace in Novi.

I think I'm going to make it an annual tradition to go to the auto show.
Posted by metrichead at 22:12 No comments:
Email ThisBlogThis!Share to TwitterShare to FacebookShare to Pinterest
Labels: Auto Show, Detroit, Detroit politics

Last night I went to Cobo Arena in downtown Detroit to see the North American International Auto Show - NAIAS as the media in town refers to it. It was nice to know that it wouldn't be leaving despite the efforts of some former Detroit City Council members, including one convicted criminal named Monica Conyers.

I got there with a friend, Sean, last night around 6:00 pm. My first thought was that the entire set up way too resembled last year's show. Major automakers such as Ford, its subsidiaries, Honda, Volkswagen, Mercedes, BMW, and GM were all in the same positions they were last year, with the same set designs. Well, Ford and Volkswagen were definitely for sure. Both had sets that would stick in your head if you had seen them the year before.

My personal favorite was the Range Rover. 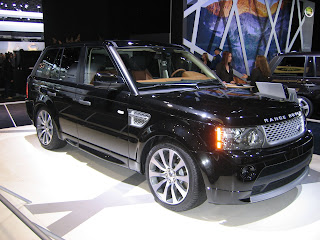 Its exterior hasn't changed much since it was first introduced to the US market, but I can appreciate the interior quality - the ergonomic design of the dash and the controls. 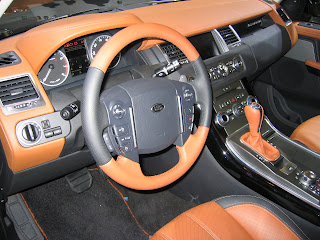 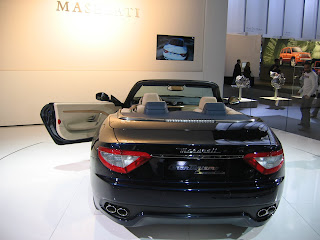 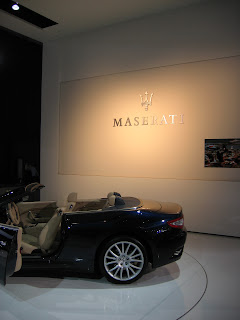 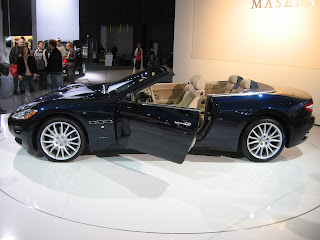 I hate the fact that I didn't take a shot of the passenger side of the vehicle - the part where the door was closed so you could see what it looks like in full profile.

We also came across some odd duck style of displays. This first one makes me question the wisdom of the architect who thought, "I know, let's just nail a car to the wall and how it goes." 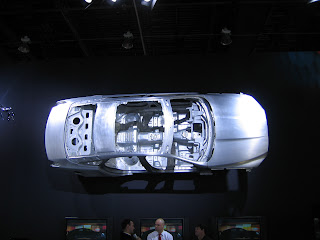 This next one says: "Jim was just a happy-go-lucky guy, unaware of the impending danger that lurked 12 feet above." 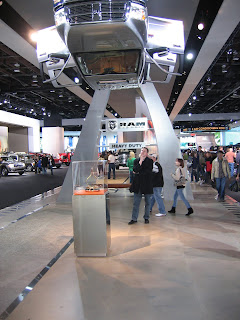 But I digress, going to the auto show is always fun. I was disappointed Jaguar and Lamborghini weren't there.

After the show, Sean and I went to a bar, whose name escapes me to meet up with friends of his. His friend's friend apparently has a popular blog, Sweet Juniper! Apparently, the author, Jim (not me), is quite popular among mommy bloggers. He's a lawyer who makes his income off his site (while his wife is also an attorney). He said he'd link up. And after seeing what's going on at EMUtalk, I might buy ad space there and just start turning this blog into one that gets traffic.

But then I'd probably miss having a blog that's a dirt road on the information superhighway.
Posted by metrichead at 00:26 No comments:
Email ThisBlogThis!Share to TwitterShare to FacebookShare to Pinterest
Labels: Auto Show, Blogging, Detroit, Detroit politics

More Random, Disjointed and Disorganized Thoughts on the Lions and Other Things in 2009

So, the season ended for the Detroit Lions the same way every other season has since 2000. No playoffs. Detroit has achieved multiple dubious honors, including the first team to go winless in the 16-game season, and having the worst overall record of any team in the 2000s. Congratulations on going 42-118 this decade. To compare, the Detroit Tigers went 43-119 in 2003. For a Lions fan, it was like reliving the Tigers' 2003 campaign over and over again for the whole ten years.

The highlights? Two victories. Two more than last year. Rookie QB Matt Stafford made the NFL highlight reel with a stunning victory over the Cleveland Browns, which by the way, was the final victory for Detroit in the decade.

Now we got the No. 2 pick in April. We slid down a spot! Hopefully, the Lions will do two things: take Ndamakong Suh if available, and then a CB in the 2nd round, and sign Reggie Bush to tandem with Kevin Smith in the backfield. Next year, we may look at 6-10. Hooray.

As for the rest of the state - it's hard to love Michigan these days. I love it, but I'm pretty much set on the fact that this state has already bit it.

I went back to school in the fall to get a certification in HR. Only one class needed now, but it'll cost me $1,084 out of pocket at EMU.

But why bother with education? It's not going to do anything for this state. Every analyst says the state's key to a turnaround is education, yet no one has any backup plan if we have all these college grads and no jobs to go to.

Last Tuesday, Lt. Gov John Cherry bowed out of the race for Governor. He knew he wouldn't win, and thought "why bother?" It's still ripe for a Republican takeover in the Governor's mansion and all other statewide offices.

Why couldn't Debbie Stabenow be running this year?

None of the GOP candidates seem to show much promise. Attorney General Mike Cox mishandled the investigation of Kwame Kilpatrick, Oakland County Sheriff Mike Bouchard speaks in conservative boiler plate spin, and no one knows who Rick Snyder (the Ann Arbor businessmen and outsider). Oh, and Pete Hoekstra? Forget it. It's between Cox and Bouchard at this point.

I might vote Green again. Then again, if it's the same Palestine-friendly guy from 2006, then I'll just sit the whole thing out.